Theatrical skating was spectacularly born in Berlin’s Admiralspalast Arena at the dawn of the 20th century. That first professional ice skating company performed there from 1911 until 1922. In 1940, Maxi Herber and Ernst Baier, German pairs skaters who won gold at the 1936 Olympics, formed their own artistic skating company, the “Baier Eisballett.” It toured Europe for many years with a tent and portable ice stage, expanding in the 1960s into South America. Hans Thelan’s “Scala” and “Pinder” shows also toured Europe in tents during that time, often combining skating with circus. 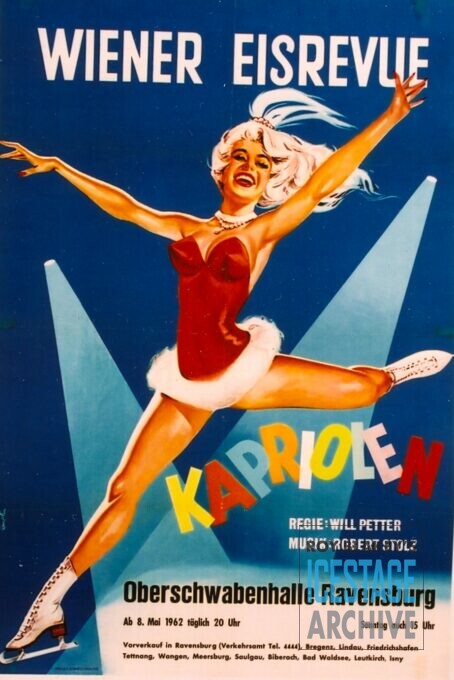 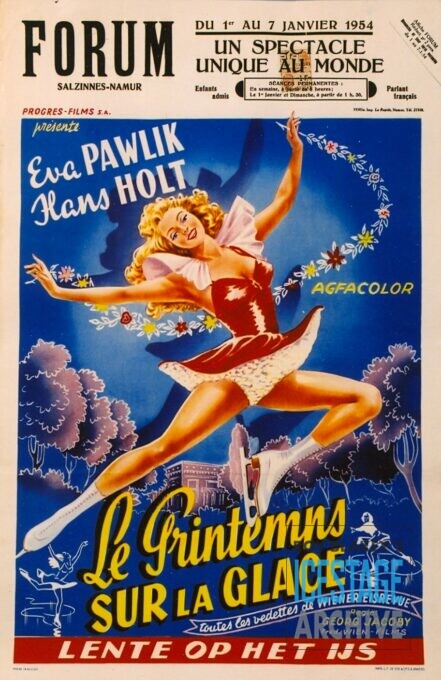 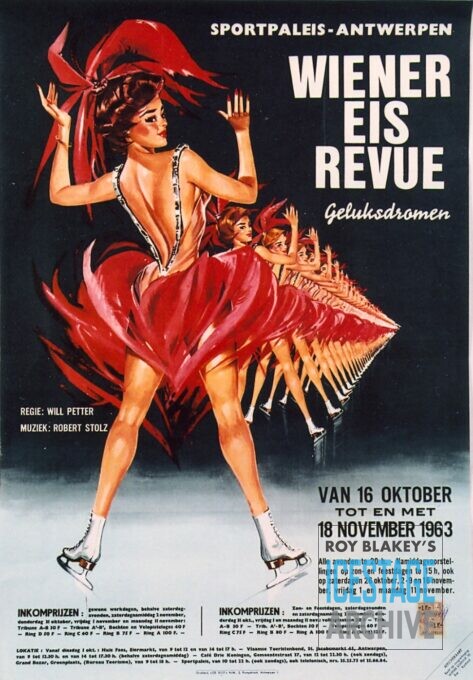 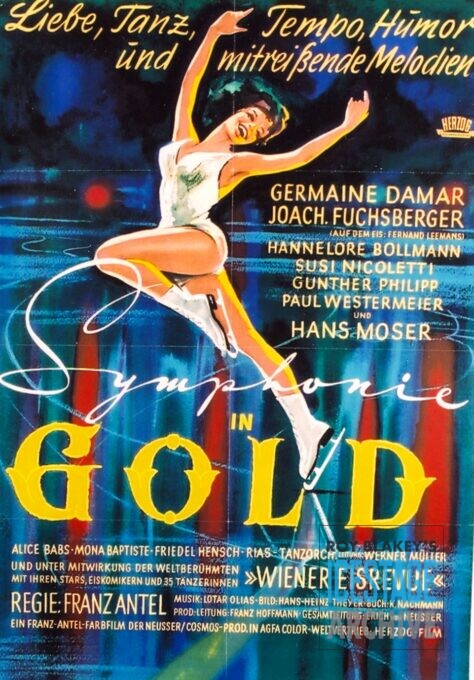 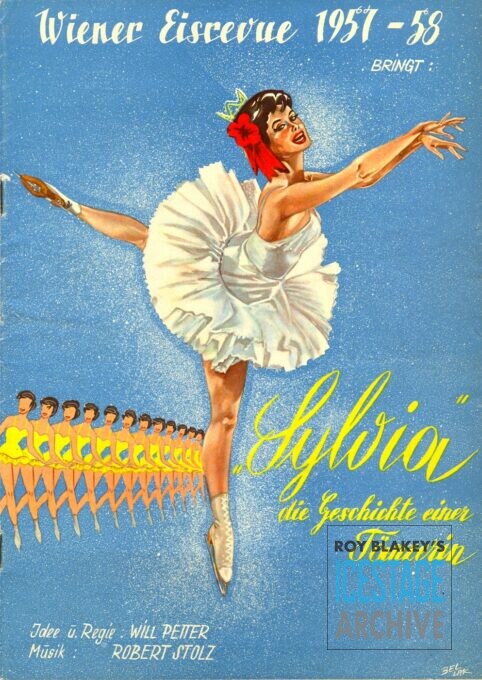 Surprisingly the U.S. Military became one of Europe’s most famous ice show producers in 1946 by constructing the Casa Carioca nightclub complete with a 30 ft. x 40 ft. rink in Garmisch, Germany, a leave and recreation center in the Bavarian Alps for servicemen. For over twenty years countless vacationing American military personnel and their guests enjoyed inexpensive evenings of dining plus dancing to the 18-piece orchestra on a large floor that retracted to reveal the ice stage for the excellent skating revues. The famed club was accidentally destroyed by fire in 1970. 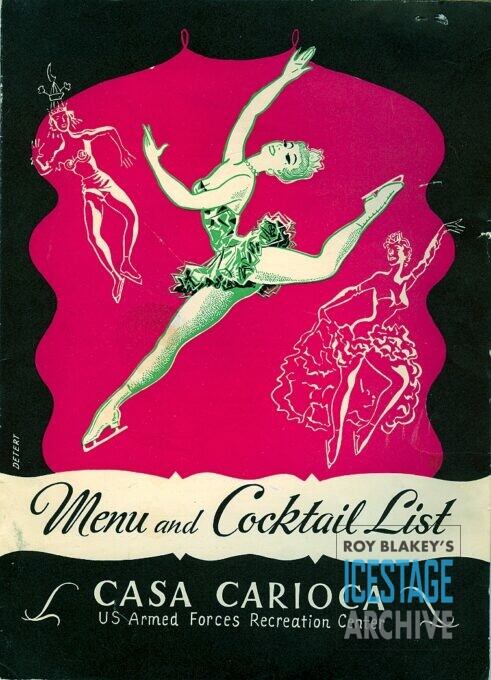 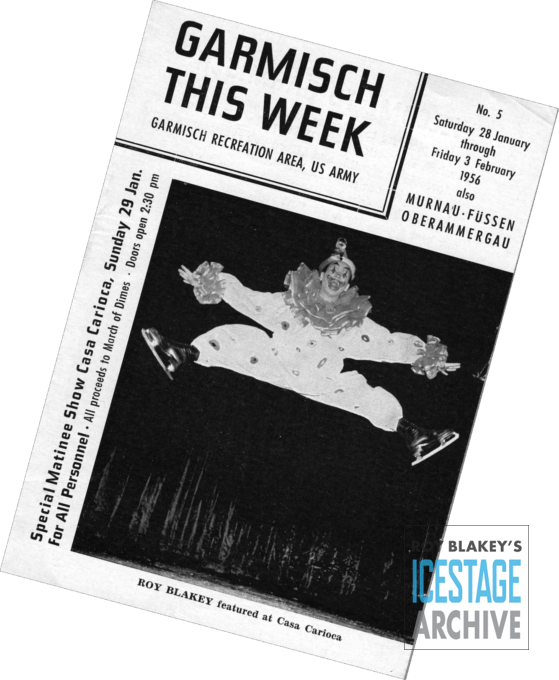 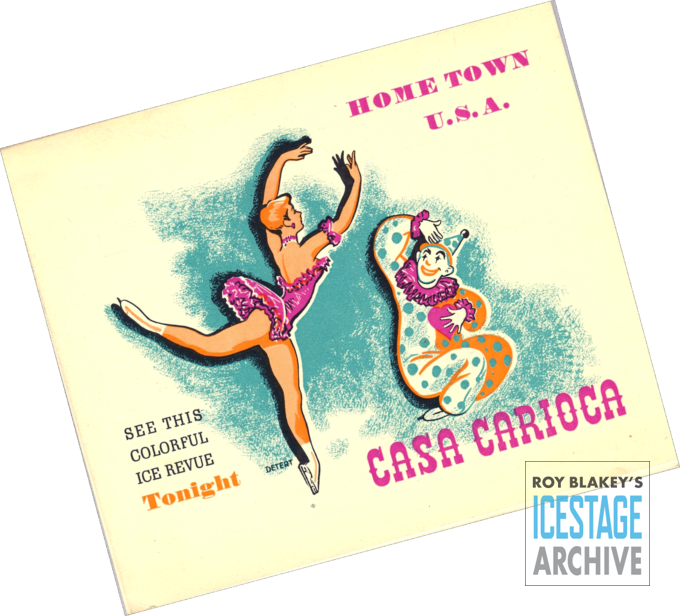 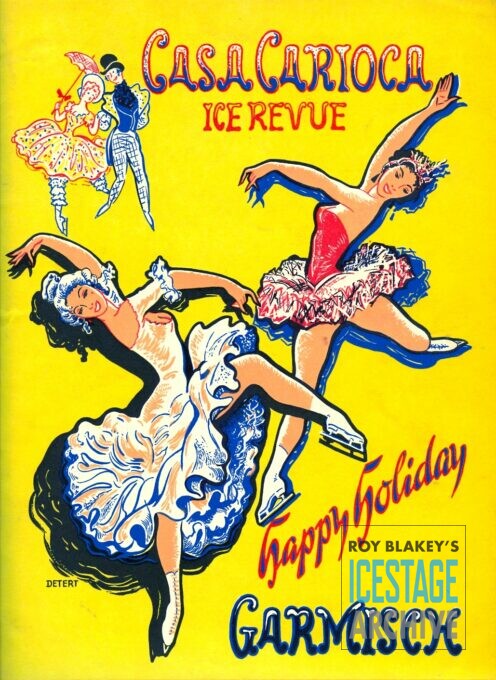 East Germany’s Circus Aeros created “Aeros Ice Revue” for at least four years beginning in the mid 50s. “Berolina Eis Revue” with a cast of East German and Czech skaters is from the same era. Posters and programs in The IceStage Archive collection indicate that occasional ice revues were also produced in Hungary and Poland during the Cold War years. 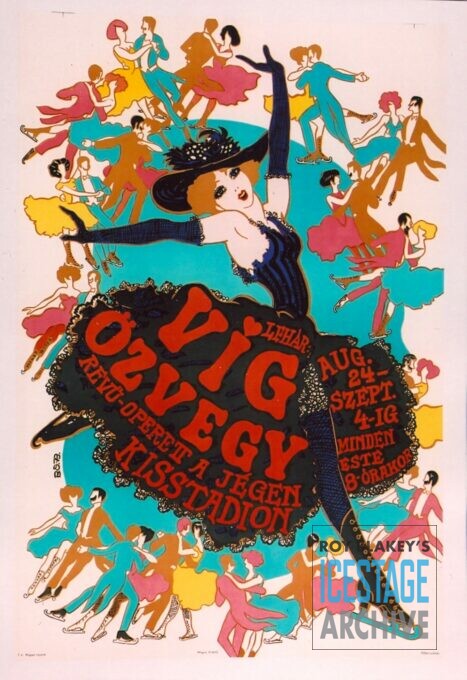 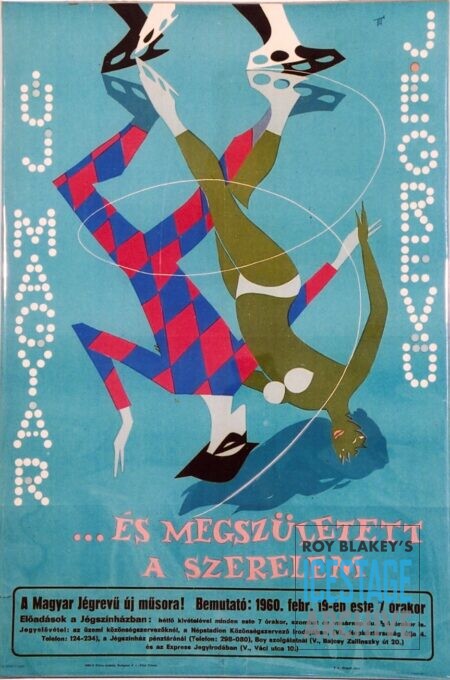 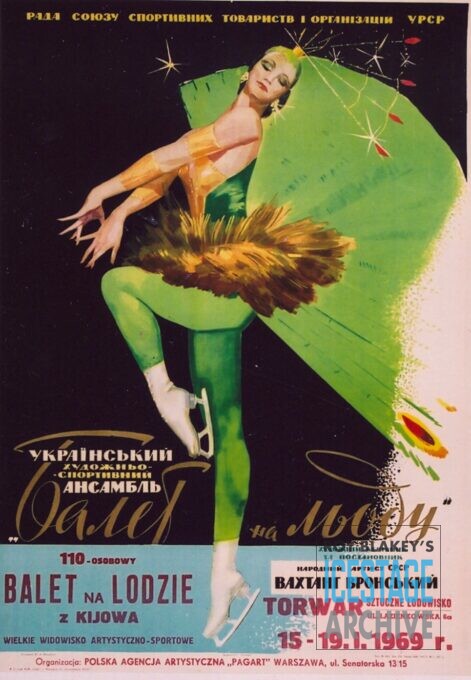 German World Champions Marika Kilius and Hans-Jurgen Bäumler won the Silver Medal at the 1964 Olympics. They were accused of having signed a professional contract prior to the Games and it was taken away. Their heartbreak was shared by the German public who made them superstars. The glamorous “Dream Pair” appeared with enormous success into the 1980s in “Holiday On Ice,” the “Wiener Eisrevue,” and such Europe Eis Theatre ice operettas as “Die Lustige Witwe” (The Merry Widow). Their ’64 medal was returned to them by the International Olympic Committee in 1987. 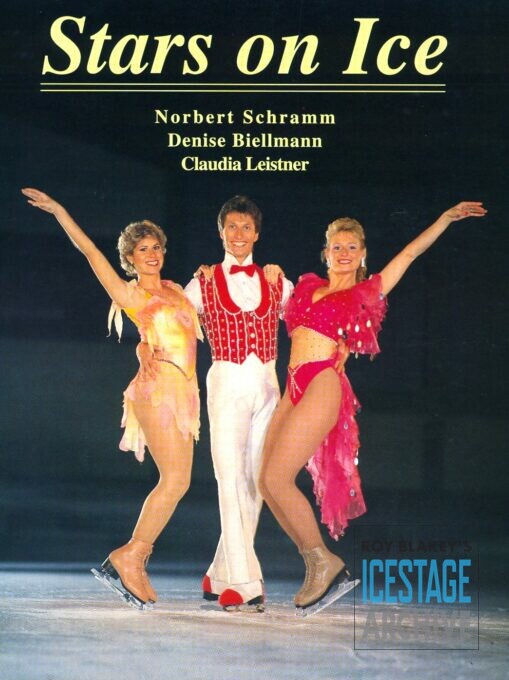 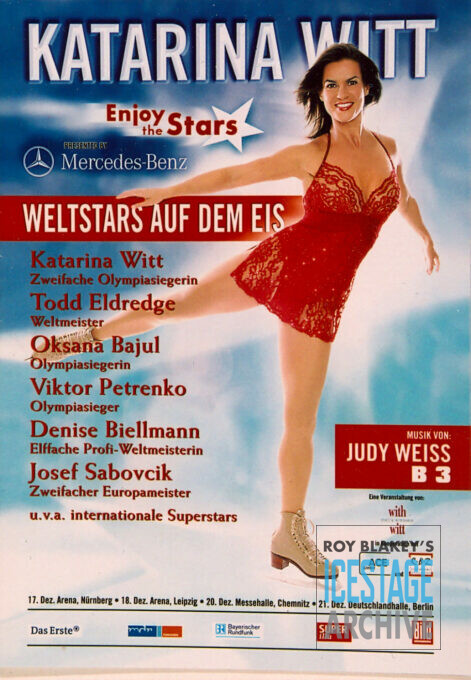 Two-time European champion and popular showman Norbert Schramm became producer and star in Germany of “Stars On Ice” in the 1980s. His company joined the worldwide trend for short tours of one-night exhibitions by casts of international champions, as did “Art On Ice” in Switzerland and “Gala On Ice” in Germany. In 2002 Schramm began creating ice shows for Europa-Park, Europe’s largest theme Park. World super-star Katarina Witt’s two Olympic gold medals for Germany guaranteed success for her numerous projects there including films and personal appearances. 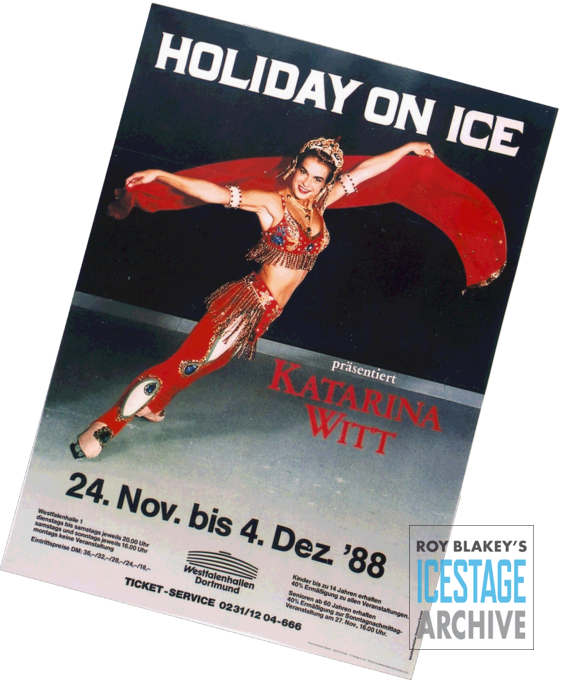 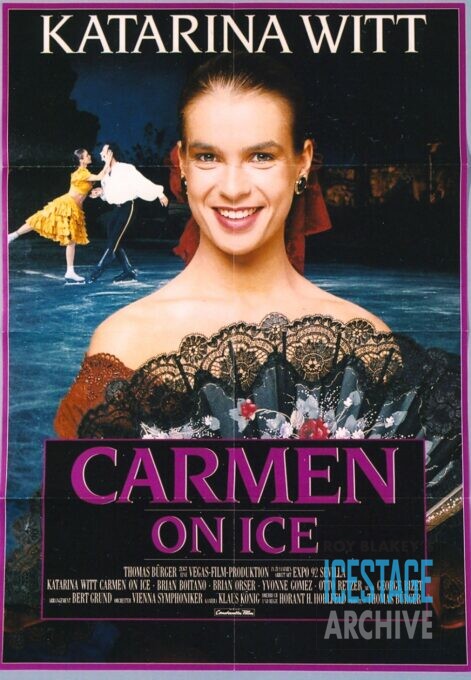 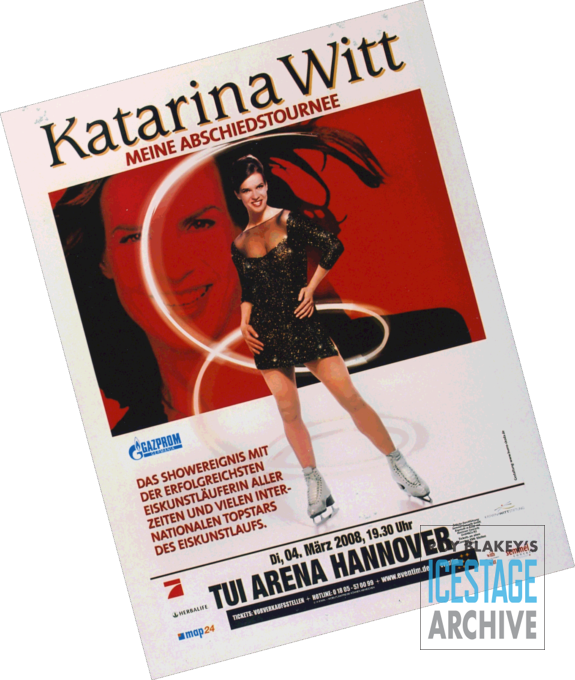 France is world famous for the legendary “Folies Bergere,” “Moulin Rouge,” and “Casino de Paris” shows which spawned innumerable imitations around the globe. Sadly no great French ice skating show worthy of that fame has ever emerged. More surprising, an American is responsible for the best known theatrical skating in France… at the famed Lido de Paris nightclub. Choreographer Donn Arden added ice skaters Dick Price and Margie Lee to his 1952 show “Gala” and every subsequent lavish production at the world renowned Lido club has featured an exciting ice act. 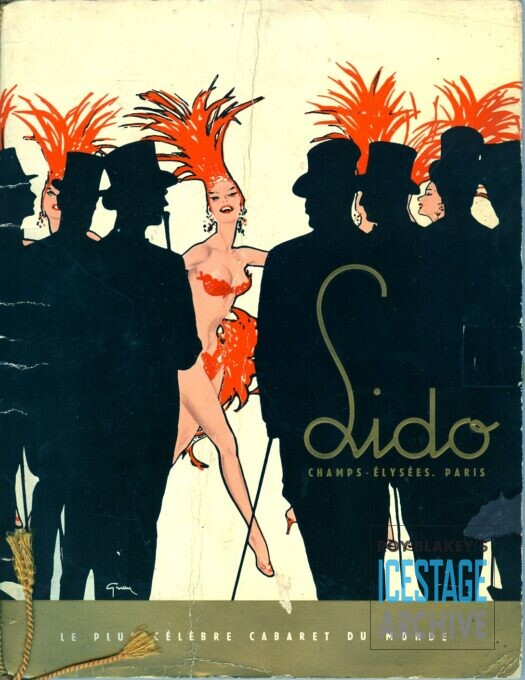 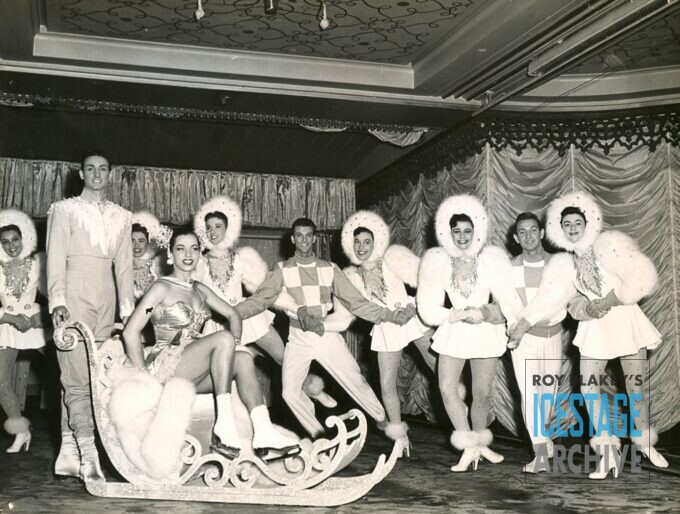 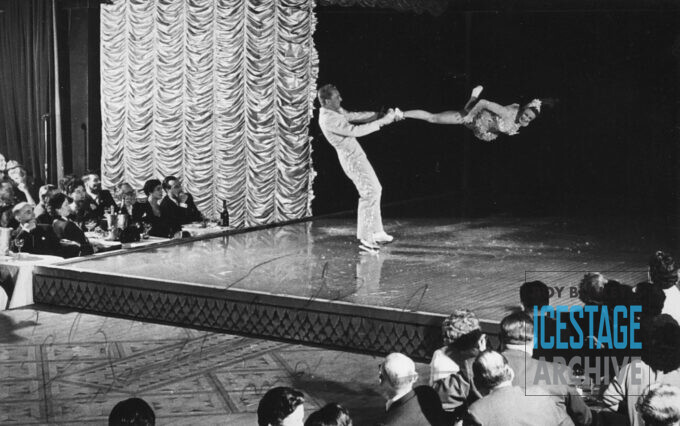 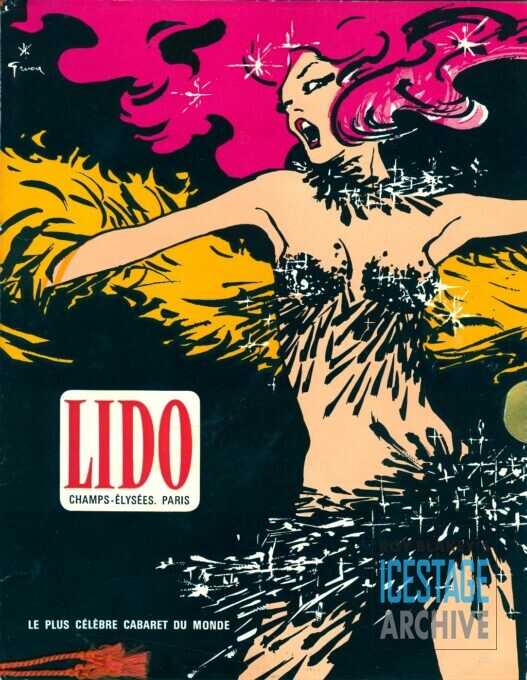 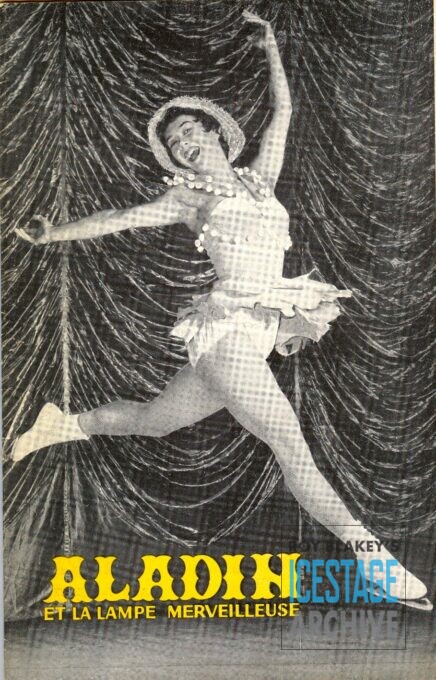 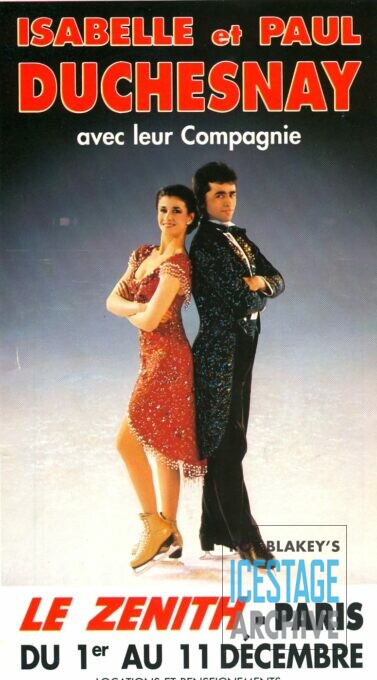 The spectacle-loving French have, however, been a very enthusiastic and appreciative audience for imported ice theatre. In 1938 an English company headed by young skater Maria Belita and great dancer Anton Dolin performed “Feerie Blanche” at the Mogador Theatre in Paris. Sonja Henie and company enjoyed several highly successful engagements in the City of Light. A production of “Aladdin On Ice” starring dynamic French skater Jacqueline du Bief was brought after great success from London’s Wembley Arena to the Palais des Sport in Paris in 1955. “Scala” and “Pinder” toured smaller cities in France during the 1950s, 60s, and 70s. “Holiday On Ice,” well received by audiences throughout France each year since 1950, boasts that famously talented Parisian craftspeople have created superb costumes for the company for many years. In the late 20th century the Duchesnays, brother and sister ice dancers, and also Phillipe Candeloro created their own companies for exhibition tours of France performing with other renowned international champion skaters. 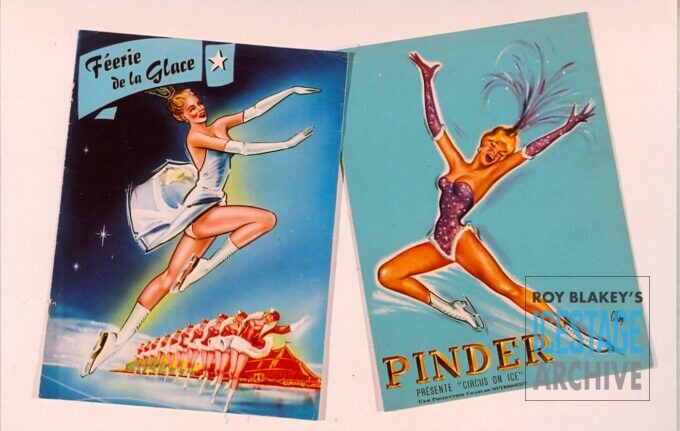 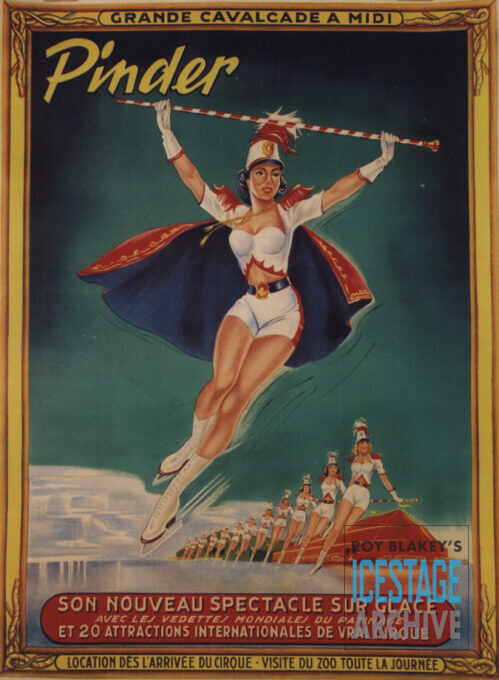 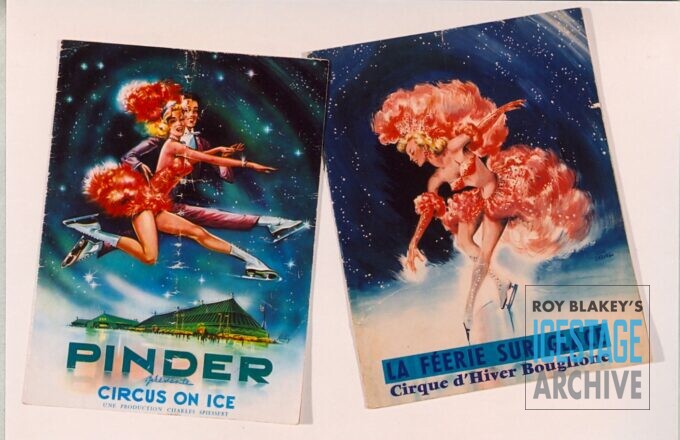 Russians have always excelled at sport, dance, drama, and music, so it’s no surprise that they eventually combined them all on ice. Moscow, Kiev, and Leningrad/St. Petersburg have each had their own Ballet on Ice companies. Even the legendary Russian circus arts have been combined with skating to create “Moscow Circus On Ice,” which has toured the world since 1965. Igor Bobrin has produced and starred with Bestemiaonova & Bukin in such Bobrin Ice Theatre creations as “Moscow On Ice,” performing them internationally since the 1980s. Many Russian ice champions such as Viktor Petrenko, Oksana Baiul, and Evgeny Plushenko made fortunes outside of their homeland and have occasionally returned to create special events for their countrymen. 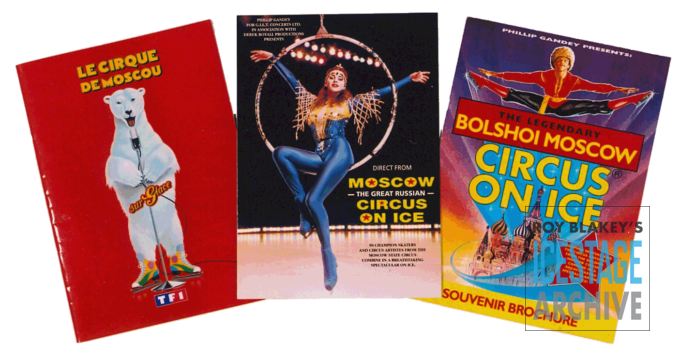 Holland, now the home base of “Holiday On Ice,” is vastly underrepresented in The IceStage Archive. A copy of a “Boumeester Revue On Ice” program at Scala in Den Haag (The Hague) is about it. My research of reports that numerous ice show performances were staged at a theatre in Amsterdam in the 40s or 50s has brought forth a couple of programs from shows visiting from England. I’d appreciate any further info—and definitely any material.

I’ve not found much material from Italy to indicate that actual ice theatre has originated there, only an occasional Italian circus program with skating included as a part of the larger show. I’m hoping for more Italian ice theatre history to emerge. However, some of the most arresting posters in The IceStage Archive collection were created in Italy—but for films and touring ice shows from other countries. For me, the three terrific Italian posters below perfectly fulfill their purpose—to catch your eye and immediately convey their message, even if you see it from across the street while passing by in a bus. 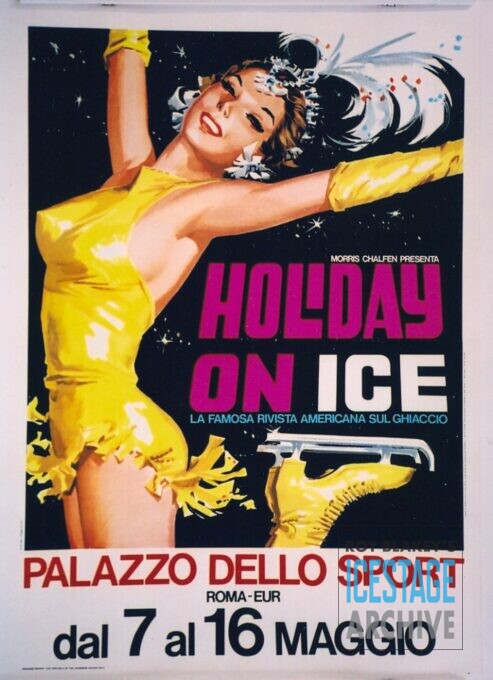 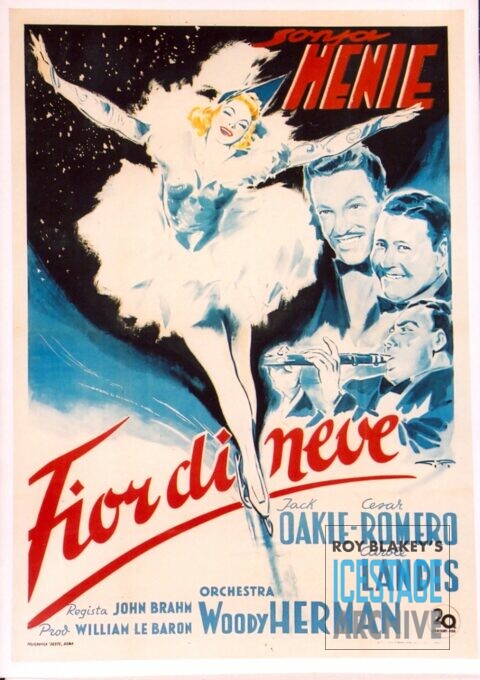 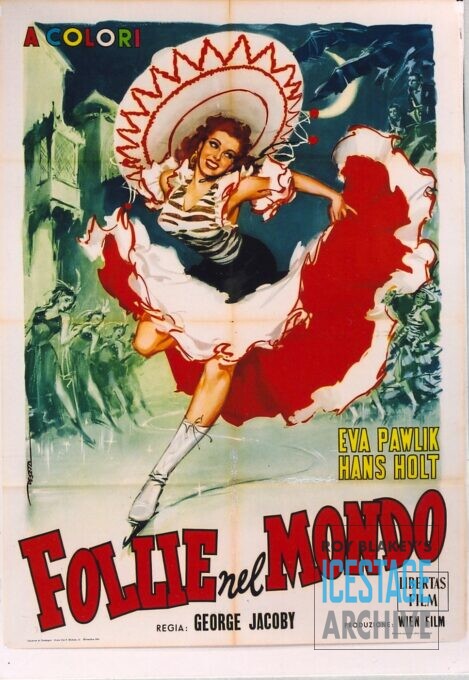